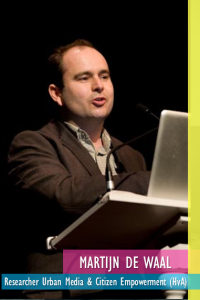 Since the beginning of the 90s Martijn de Waal follows the developments in the field of new media
closely. First as a freelance journalist/correspondent in Silicon Valley for the Volkskrant, Nieuwe Revu, Intermediair and VPRO Radio, later as an independent researcher.

De Waal is one of the founders of DeNieuweReporter.nl, one of the leading Dutch weblogs about the future of journalism. Together with Michiel de Lange he took the initiative for TheMobileCity.nl, a weblog, series of conferences and research forum on the role of digital and mobile media in urban design.

In 2011 he was a guest researcher at the Center for Future Civic Media at MIT in Cambridge, MA. In early 2012 he obtained his doctorate with his thesis The City as Interface at the department of practical philosophy at the University of Groningen. He is currently a lecturer at the MA course in journalism at the University of Amsterdam. He is also founder of The Public Matters, a think tank, research lab and strategic consulting firm that examines the role of new media in society.