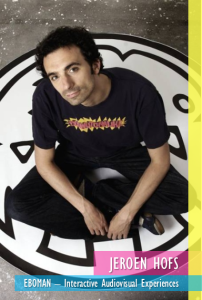 Jeroen Hofs a.k.a. ‘Eboman’ is a pioneer in the field of interactive audiovisual experiences. Eboman has proven over and over again to be ahead of his time if it concerns real time video sampling. He started his project in 1995 as a soundsampler in the ‘Bigbeat’ genre. In 1996 he won the Silver Harp; a price that represents up-coming artists. In 1997 he received the ‘Popprijs’ at ‘Noorderslagfestival’. In that same year he had his big break true with ‘Donuts With Buddah’. Since then he preformed several times at the two biggest outdoor festivals in the Netherlands named ‘Lowlands’ and ‘Pinkpop’

He started his own company called EboStudio. They build technology for realtime, interactive experiences on and beyond the screen
Are you a creative agency, DJ/performer, event organiser or media producer? Do you have a concept or design for a digital experience? Need technology for a show, presentation, installation or mobile application? Their team builds hardware and software —whatever it takes — to develop entirely new effective means to create and communicate your experience.

‘Eboman’ is well know in the creative, media and technology industry. He presented his musical arts and visuals at the Cross Media Café (iMMovator) held on the 4th of November 2014. Check out his mindblowing presentation down below.