Co-founder and Editor-in-Chief of De Speld. 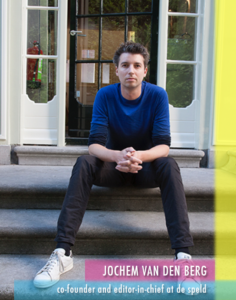 With a background in theatre and masters both Religious Studies and Philosophy, he founded De Speld in 2007. The satirical site became well known for their ‘objective news’ and social commentary. In the later years the website expanded into other outlets like video, tv, radio, books and live performances.

De Speld is a satiric online newsmagazine. In essence this mediums’ news items aren’t true but are written as if they could be. Lots of people, mostly on social media, think their items are real news items and react to it. This leads to great discussions amongst people on Facebook and Twitter. Even other news institutes sometimes make the mistake of believing De Speld’s news is real and post it on their own website. De Speld won a