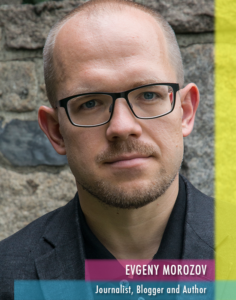 Evgeny Morozov is the author of The Net Delusion: The Dark Side of Internet Freedom and To Save Everything, Click Here: The Folly of Technological Solutionism.

In 2010-2012 he was a visiting scholar at Stanford University and a Schwartz fellow at the New America Foundation and a fellow at Georgetown University in 2009-2010 and in 2008-2009 he was a fellow at the Open Society Foundations, where he also sat on the board of the Information Program between 2008 and 2012.
Between 2006 and 2008 he was Director of New Media at Transitions Online.