Nell Watson is an engineer, entrepreneur, and futurist thinker who grew up in Northern Ireland. She 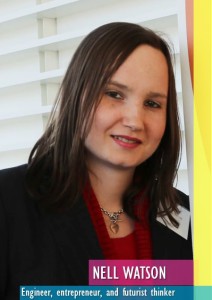 has a longstanding interest in the philosophy of technology, and how extensions of human capacity drive emerging social trends.
Nell lectures globally on Machine Intelligence, AI philosophy, Human-Machine relations, and the Future of Human Society, serving as Associate Faculty at Singularity University.

She has had an unusual career, including teaching post-grad Computer Science at the age of 24, and later co-founding a successful Graffiti arts company. Her ability to bridge the world of technology and the Humanities makes it easy for her to translate complex subjects so that they can be clearly understood.

In 2010 Nell founded Poikos, a machine learning-driven ‘AI for for body measurement’. Nell’s patented technology ‘dematerialises’ the 3D body scanner, by providing accurate 3D scans of the body with only 2D camera hardware, such as that found within smartphones, or laptops. This may then be applied to a range of markets, such as mass customisation, and health.

Possessing a long-term mindset, Nell serves as Senior Advisor to The Future Society at Harvard, as well as serving as an advisory technologist to several startups, accelerators, and venture capital funds. She is also Co-Founder of OpenEth, an ‘ethical explication engine’ that aims to crowdsource ethical heuristics for autonomous systems.

In her spare time Nell enjoys coding games, such as her startup life simulator, Founder Life. Founder Life attempts to teach the mindfulness and psychological habits necessary for entrepreneurs to consistently execute under pressure. She has also written two easily digestible books on philosophy – one for business leaders, and one aimed at children.