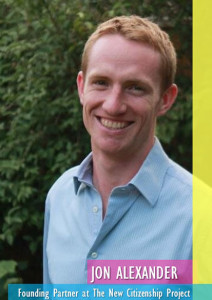 Jon founded the New Citizenship Project in 2014 as an innovation company, generating and delivering creative projects which promote the role of the Citizen, inspiring participation in society. His ultimate goal is to replace the ‘Consumer’ with the ‘Citizen’ as the main role of the individual in society.
Jon’s early career was spent in London advertising agencies where he developed brand strategies for organisations like Sainsbury’s, Orange, Cadbury, Sony and Eurostar; after which he spent three years working for the National Trust before leaving to set up the New Citizenship Project. Somewhere along the way, he gathered three Masters degrees, and has represented Britain in two sports.

The New Citizenship Project
The New Citizenship Project is a social innovation lab, established in 2014 to help catalyse the shift to a more participatory society. Founded by brand purpose experts Jon Alexander and Irenie Ekkeshis, we use creative strategy and innovation practice to promote the role of the Citizen
We want to reclaim the idea of the ‘Citizen’. Studies show that when we think of ourselves as just Consumers, we’re less likely to tackle society’s biggest problems, from climate change to international inequality.
When we think of ourselves as Citizens, we’re more likely to participate, volunteer and come together to make our society stronger and more effective.
We work with all types of organisations, both in one to one consultancy and collaborative innovation projects, developing approaches intended to feed the Citizen in all of us.