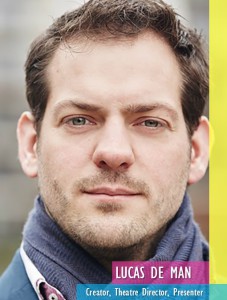 Lucas de Man is a professional Theatre Director working as Artistic Director for Nieuwe Helden. In his projects and actions, Lucas strives to transform public spaces into spaces that connect, amaze, distract, surprise, and confuse. He creates moments in which individuals encounter themselves, the other and the world, to affect their own quest – moments in which they are not forced but instead allowed to be.

He also works as a freelance director, actor and concept developer for among others Het Zuidelijk Toneel, Frascati and Toneelgroep Amsterdam. He hosts a variety of cultural programmes, gives lectures and has won several prizes for his directing work.

For the project In Search Of Europe, Lucas de Man travelled 17 cities in 8 countries in 30 days and interviewed more than 20 young creative professionals who are trying to improve the society they live in. The new generation in Europe is ready to fight for change.